When it comes to insightful analysis of the latest digital marketing headlines, you can rely on the news roundup segment in each episode of the EDGE. The latest features host Erin Sparks and Creative Studio Producer Jacob Mann along with special guest Dawn Anderson, Managing Director of Bertey. Here’s the news roundup from Episode 340 of the award-winning EDGE of the Web podcast:

Is ‘dwell time’ the next big thing for SEO?

On Impact, Kaitlyn Petro asks Is ‘dwell time’ the next big thing for SEO? According to Search Engine Journal, “Dwell time is the length of time a person spends looking at a webpage after they’ve clicked a link on a SERP page, but before clicking back to the SERP results.”

According to Taylor Peterson on Marketing Land, Facebook deals with more lawsuit trouble. Four tech firms have launched a lawsuit against Facebook on antitrust grounds, demanding that Mark Zuckerberg give up control of the company. The four little-known firms – two of which are now defunct – teamed up to accuse Facebook of running “the most brazen, willful anticompetitive scheme in a generation,” according to the action filed in January 2020.

From Matt Southern on Search Engine Journal we learn that Webpages with Featured Snippets Won’t Appear Twice on Google Page 1. Google’s Danny Sullivan has confirmed that webpages in a featured snippet position will no longer be repeated in regular Page 1 organic listings. This is a brand new change rolling out as of today. The change will affect 100% of all search listings worldwide.

Connect with Dawn Anderson and Bertey

Get Your Digital Marketing News from the EDGE Newsletter

When you want the latest digital marketing news you can use, you don’t have to visit a dozen different sites and read a bazillion articles. You can have your digital marketing news curated and delivered directly to your inbox! Go to EDGEofthewebradio.com and you’ll see the subscribe box at the very top of the page. It’s free-of-charge, and we will never use your email for anything except sending you the newsletter. You can also sign up by texting the word “EDGETalk” to 22828, but not while you’re driving! Enjoy these digital nuggets of gold from the EDGE – your source for digital marketing news. 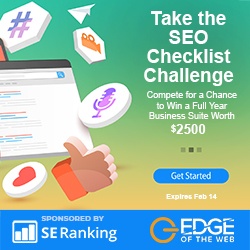